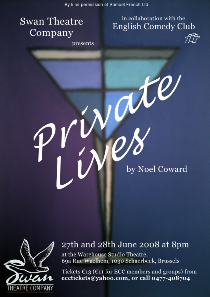 Everyone loves an intimate affair, and Private Lives is no exception. What is surprising is that Coward himself once dismissed the play and attributed its crowd-pleasing properties to nothing more sophisticated than the titillation factor of references to sex. Noel Coward wrote it at the height of his powers and it displays some of the best of his pungent and biting wit. John Osbourne called it ‘the greatest comedy ever.’ High praise indeed but totally justified.

Time has proved this tale of two divorcees who fall for each other all over again to be the kind of classic worth watching decade after decade. The play centres on divorcees Amanda and Elyot who both having remarried are in France with their new spouses. Not only do they find themselves in the same hotel on their wedding night but they are in adjoining rooms. The old fires start to burn again between Amanda and Elyot with devastating effect. Their passion swings from contented bliss to violent rows with amusing frequency.
This is a play that you can never tire of watching. Swan Theatre company has been fortunate in drawing together a cast from some of the strongest actors in Bedford, some of whom will be known to you from previous visits of Swan to the Warehouse.

We use cookies to analyse website usage, deliver personalised offers and promotions and improve your browsing experience. More info